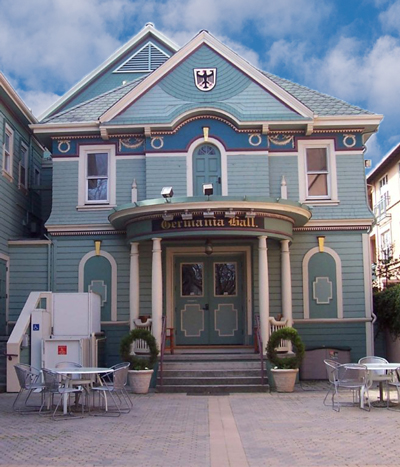 The History of Our Club

In the book ‘The San Jose Township’, which was published in 1882, at the bottom of page 499, it simply states: The Verein was started in the year 1856. In 1865, the club incorporated and it became the Germania Verein. The article mentions all the officers by name. Mr. Louis Krumb, who was born in Darmstadt in 1836, was elected the first president.

It goes on to say: “The Society is entirely a social one, its rooms at the corner of Santa Clara and First Streets being open to members only on Thursday of each week where there is a well-selected library and reading room. On the last Sunday of each month a dramatic entertainment is given, where each member is entitled to invite a certain number of guests.” The club prospered and began to entertain its guests with concerts and plays. The Orchestra was named: “The Germania Verein Amateur Orchestra”.

The Club started out as a men’s club but in 1875 full membership and voting rights were granted to the women.

In 1882, the club members moved into a brand new, elegant clubhouse at 114 South Second Street. The Mercury wrote a long and detailed story about the affair. Poetry was written especially for the event and recited by its members in German and English.

The Orchestra played, which by then had changed its name to The Orchestral Society. Out of this musical group grew the San Jose Symphony which continued on for 123 years when it declared bankruptcy in 2002.

A Fire and a New Beginning

The Germania Club House at 114 South Second Street burned to the ground on May 5, 1885, while the members were attending a picnic at Glenbrook’s Blackberry Farm in the Santa Cruz Mountains.

It was a hard blow for the members and it took some time to recover. The club moved to different locations until the members acquired the King Conservatory of Music in 1923 which is still our clubhouse today. The current Germania Hall was built as a Music School and Auditorium by Professor Louis King who dreamed of making San Jose the Bayreuth on the West Coast. Some of his students continued on to Berlin and letters prove how impressed Berlin was with the quality of students that came from the remote West Coast of California.

Opening Night for the Conservatory was on December 13, 1894 and, of course, the Orchestral Society played tunes such as Zigeunerweisen, Einsamkeit und Bolero among other musical selections.

In 1892, members had their club rooms above Lion’s carpet store in the Minna Building on South Second Street. Gustav Lion, who came from Elsass Loraine, died in 1923. According to the Redevelopment Agency of San Jose, the Conservatory of Music changed hands in that year and became the Germania Hall. This building, at 261 North 2nd Street, has served the German immigrants well, especially during the Second World War and later when new immigrants arrived. Many young people found their partner for life at the Germania Hall.

Tragedy struck again, when on August, 20, 1999 our beloved Germania Hall was ablaze, at 9 o’clock in the morning. Lucky for us the facade remained in tact and the building was restored.

Many of the important Santa Clara County pioneers were members of the Germania Verein. Everybody who was somebody in San Jose belonged to the Verein. The membership list reads like who is who. At least 75 German pioneers can be named who, through their skills and professions, have made a difference in this city in every field.

We hope that, future generations will enjoy this building as much as we have and will try to keep the German heritage and culture alive and well.